Posted on November 9, 2011 By Golfmadchick

It had been another tough week.  My little newspaper was headlining again for all the wrong reasons with a global spotlight focused directly on the second floor of an office block in Wapping.  Not for the first time had we found ourselves in this situation. I was well versed in the drill but it didn’t get any easier.

After a sleep-deprived week spent juggling heated executives, ranting emails and smug cardigan-wearing journalists, I was nearing the just shoot me now phase.

So when my delightful Travel Editor Trisha strolled into my office and presented me with a golf press trip to Bermuda, suddenly life didn’t seem quite that bad.  Even if it was to a place where planes and ships mysteriously vanish without trace.  And so it was, despite risk of my being misplaced over the North Atlantic Ocean, I took to my roomy leather lounger on flight BA2232, direct to paradise. 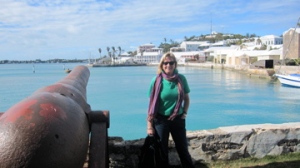 The first thing to pack for Bermuda is your sunglasses – because it’s one dazzling place to take a holiday.  Brilliant azure seas and blushing pink-sand beaches in fiery sunlight in this haven off the east coast of America. Picture Wisteria Lane meets Blue Lagoon to imagine its charming pastel-shaded colonial towns overlooking the glorious ocean. At just 22 miles long and two miles at its widest point, this Atlantic fishhook-shaped archipelago of islands-connected by a series of bridges – is Britain’s oldest overseas territory. And with one private car allowed per household and a national speed limit of 21mph, Bermuda’s pace is refreshingly laid back. 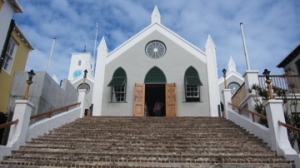 As we drove along the narrow lanes, Oliver our tour guide explained Bermuda’s cricket-mad nation is home to the traditional Dark ‘n Stormy rum cocktail, the raucous tree frog and not a single fast food outlet.  Over the years, many celebrities have made their homes here.  Actor Michael Douglas’s mum was born on the island and he and wife Catherine Zeta Zones had a house here for a long time. 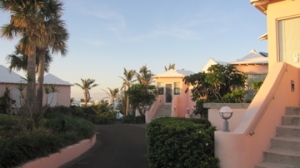 On a discreet peninsular on the western corner of the island is the exclusive Cambridge Beaches.  The top-rated resort and spa oozes class and old money, yet caters for honeymoon  couples and others seeking privacy and pampering.  As you enjoy sumptuous dinners by candlelight, unwind in the Ocean Spa or explore the gulf stream’s crystal clear waters, it’s as close to paradise as it gets.

I also stayed at the The Fairmont Southampton, perched on the island’s highest point.  It boasts a relaxed old-world British charm spread over 100 tropical acres.  And 18 holes of golf on the executive par three course followed by a dip at the private beach concentrates the mind on the good things in life. With more courses per square mile than anywhere else, it’s easy to understand why the island is a golfer’s magnet.

Douglas and wife Catherine are both keen players so they must have ventured to Tuckers Point Hotel and Spa, a stunning waterfront property overlooking Castle Harbour with a fabulous championship course.  After a late night at the lively Swizzle and Swagger, finding those elusive fairways in the face of whipping Atlantic winds proved amusing if not problematic.

The Port Royal Golf Course is deservedly the proud home of the prestigious PGA Grand Slam of Golf.  The panoramic views are post card perfect but the dramatic layout requires flawless shots and deep breaths.  And that’s before you reach the signature 16th hole – a 235 yard cliffside par three. 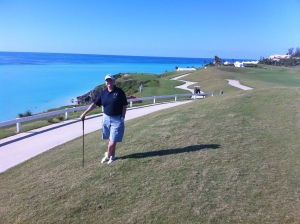 Ocean to the left, bunkers to the right and a rocky gulf between you and the green.  Play it right and you’ll be in seventh heaven.  Play it left and take your snorkel with you.  It’s certainly a dilemma and every bit as intriguing as the island itself. But one thing is for certain, when my time on this planet is up, I want to come back as a tree frog and just hangout in Bermuda.

← Prince Amongst Wales of Courses
A Declaration of Love →